You control Joanna Dark (whose codename gives the game its title), one of many trained operatives at the technology research group known as the "Carrington Institute." Dark is sent to liberate a scientist and investigate the plans of nefarious rival organisation dataDyne, unravelling a whole new web of intrigue in the process. The story features an excellent blend of espionage and action set against a futuristic background that combines cyberpunk with conventional sci-fi elements, all offset with some comical characters and humorous dialogue. An impressive variety of locations includes a Blade Runner-flavoured infiltration mission situated on the rain-covered streets of dystopian future-Chicago, and even an undercover mission set on Air Force One (thinking about it, I haven't played a video game mission set on an aeroplane since).

GoldenEye veterans will feel at home in agent Dark's world -- the game runs on the same engine, uses the same core controls and has a very similar feel to its predecessor. Different players are likely to take different approaches to each mission. If you want to take your time and carefully sneak through a level, quietly picking off guards, you can (with patience). You're equally well placed to shake things up with a shotgun, though, and sometimes you won't have a choice if the alarm has been raised. Both stealth and action meet during a mission that requires you to infiltrate a laboratory, access a particular area in disguise, and then perform a frantic escape on a hoverbike. Thanks to some great pacing, Perfect Dark rarely feels repetitive, and sequences like this demonstrate the surprising scope of the gameplay -- considering its quite simple mechanics.

Sneak or shoot? Different approaches can be taken according to your style of play.

Along the way you'll encounter increasingly better-defended enemy bases, meaning you'll have to utilise an abundance of weapons and gadgets to complete your objectives. These gadgets include the CamSpy, a remote controlled surveillance device that also comes in tranquillising and explosive variations. Each weapon you wield offers a secondary-fire function, which gives you further flexibility. This means you can disarm enemies when unarmed (which can also be done by shooting their weapons), perform a pistol whip with a handgun, launch grenades from assault rifles, and even lay sentry turrets and proximity explosives. My personal favourite has to be the grenade's aptly-named "proximity pinball" mode, which is ideal for a corridor full of guards.

This attention to detail is what makes Perfect Dark such a step-up from GoldenEye, and it doesn't stop there. Every gun has its own reload animation, which may sound pretty mundane but actually made the entire experience more immersive back in 2001. I would be both infuriated and astounded when Joanna's vision went blurry after taking a punch, and would ruthlessly smile as she coolly tilted her pistol sideways when stood directly behind an oblivious guard (trust me, it makes it so much cooler).

You're free to shoot anyone during your missions but remember that some people need to be kept alive.

The excellent variety continues in the game's available modes. You can choose between three difficulty levels in the single-player campaign, or tackle the story with a partner either co-operatively -- with a human or a bot -- or counter-operatively, where the second player takes control of a mission's enemies. Each difficulty mode adds some new objectives, which provides plenty of replay value, especially as completion on each setting unlocks different cheats and bonus levels. Objectives include simple assassination; the location, protection, and rescue of hostages; the acquisition of disguises; sabotage using computer viruses; data theft; and explosive disarmament. You can also explore the Carrington Institute by leaving the mode selection menu. Here you can bump into various members of the agency and complete training and firing range challenges to unlock more weapons. ( Hint: It also pays to know the layout of this building later in the game.)

The main multiplayer mode comes in the form of the "Combat Simulator." Games can be configured to include a group of human players, bots (referred to as "simulants," whose personalities can be defined), or a mixture of both. There's a decent selection of fairly large maps based on the story mode's locations, each suitable for every game mode. Most of the modes you'd expect from a multiplayer FPS are present, as well as some fun and interesting variations such as "Hacker Central" and "Hold the Briefcase."

Up to four humans can take on up to eight bots in the Combat Simulator.

Even two players can have immense fun thanks to these beefed up multiplayer options. For example, a game of "King of the Hill" against a team of "FistSims" (bots that only attack unarmed) can be a team-affirming, nerve-racking stand and defend experience that almost feels like a scaled-down Left 4 Dead (it at least produces the same giddy yelps I let out while playing the zombie shooter). Alternatively, a standard deathmatch can be spiced up with the addition of a few bots, especially with personalities such as "JudgeSim" (a bot that focuses on killing the leading player) and "FeudSim" (a bot that picks on a random player for the entire game).

The Combat Simulator also offers its own set of player(s) vs. bots challenges, each of which unlocks weapons, modes, maps, and characters for use in multiplayer. Unlock all of the content, gather a handful of friends and carefully configure scenarios, and you can end up spending hours in the Combat Simulator before you even think about the single-player campaign you've yet to finish.

Perfect Dark isn't without its flaws, though. The frame rate can become rather sluggish during moments of intense conflict -- something that has become more noticeable with age and is now harder to forgive. The AI seems impressive when guards run for help or hit alarm switches, but any illusion of intelligence is broken when they ignore sentry-guns and proximity mines. Although stealth can often be deployed with success, the level design and enemy placement is such that a sneaky approach will often break down entirely -- with no option but to begin shooting up the place. While some of the dialogue is funny and entertaining, the voice acting is generally poor and the repetitive slogans that the guards spew out can get pretty irritating after a while. Despite these minor issues, however, the game's variety and size ensure that it is in no way overly tarnished as a result.

If you fancy picking up the game for N64, make sure you've got an Expansion Pak. Without this, the majority of the game isn't available, including the main campaign and most of the multiplayer options. Why the accessory wasn't just made mandatory (as with Majora's Mask or Donkey Kong 64) is something that I've never understood. Using the Game Boy version in conjunction with a Transfer Pak unlocks yet more cheats.

Some of the unlockable cheats tip the balance quite heavily in your favour.

Unfortunately, a feature of the game I had been looking forward to was never included. I read in N64 magazines at the time about a planned feature that would allow players to use their Game Boy Camera in conjunction with the Transfer Pak to add their own faces to the characters in the game. Being a sucker for customisation, I was pretty disappointed when this didn't make it to the final version.

After a buyout from Microsoft in 2003, Rare released a sequel for the Xbox 360 -- originally planned for the Gamecube -- entitled Perfect Dark Zero in 2005. I have never played the game, so I cannot comment on its quality. But if you do own an Xbox 360, the original N64 title has now been given a high-res update and is available on XBLA. I haven't played this update, either, but the consensus seems to be that the game has remained pretty much the same aside from a cosmetic upgrade.

The cosmetic upgrade is certainly noticeable.

If you're looking for the true spiritual successor to Perfect Dark, get stuck into Free Radical Design's (now Crytek UK) Timesplitters series. The team was formed by members of Rare, meaning the games are quite reminiscent of their N64 shooters. In terms of emulation, I've not tried the game with either of the available Mac emulators in quite some time, although compatibility was never great last time I checked. I have tried the game on Project64 using Wine, and it does seem to play pretty well -- far smoother looking than it ever was on the N64. Take whichever option is available to you, but I'll always recommend the original over the rest.

Lara who? Agent Dark covers up a little more than a certain well known female protagonist. 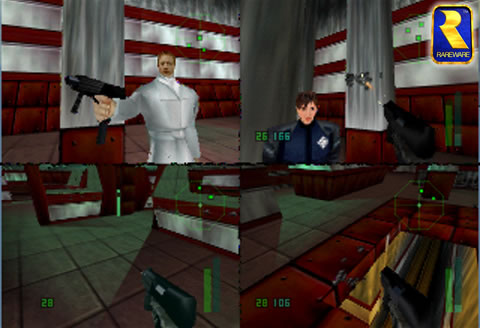 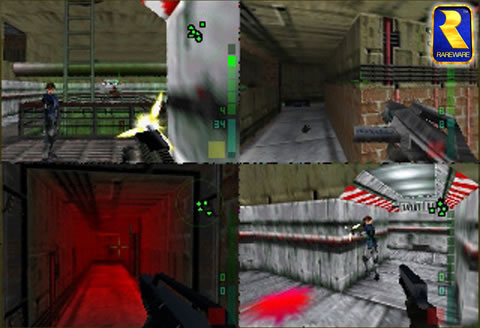 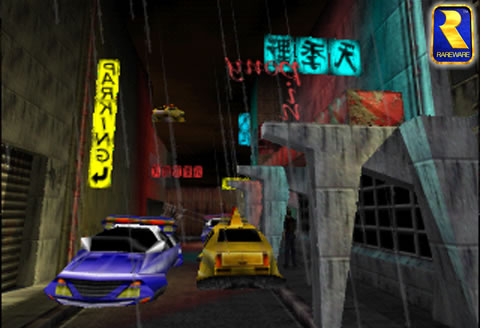 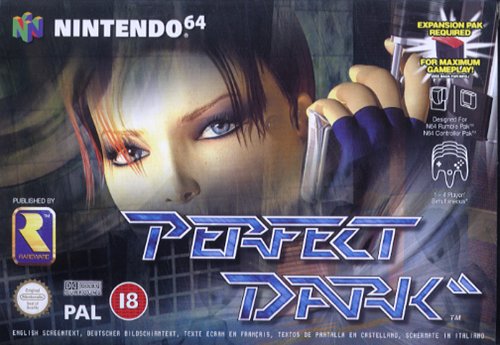 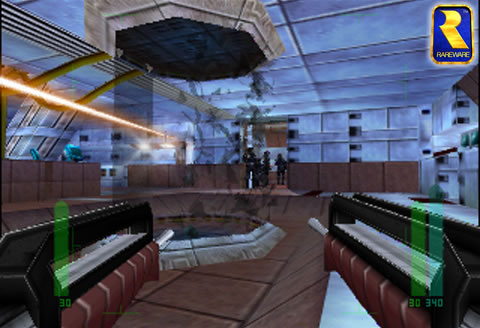 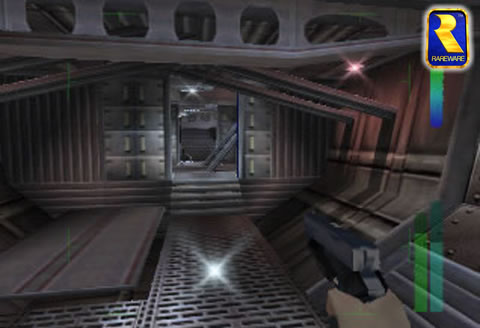 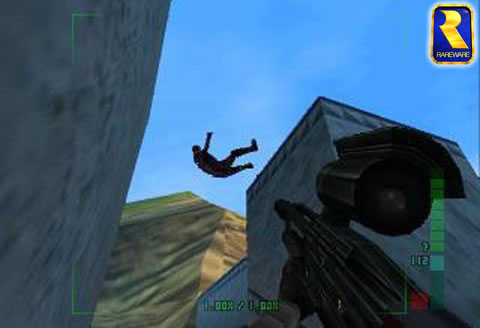 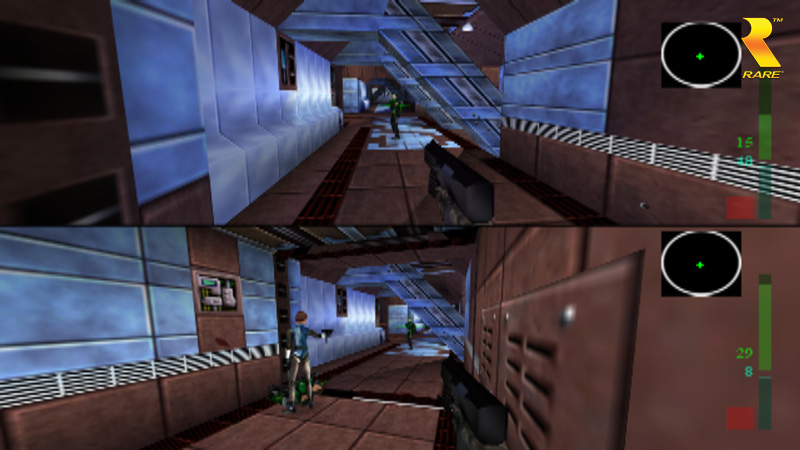 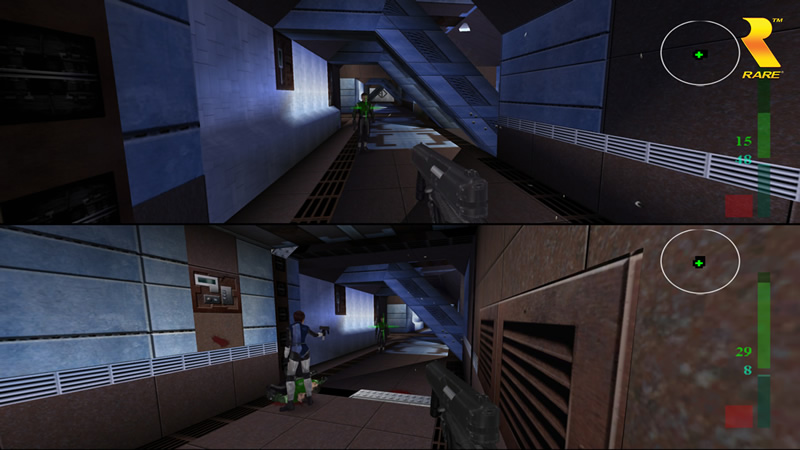 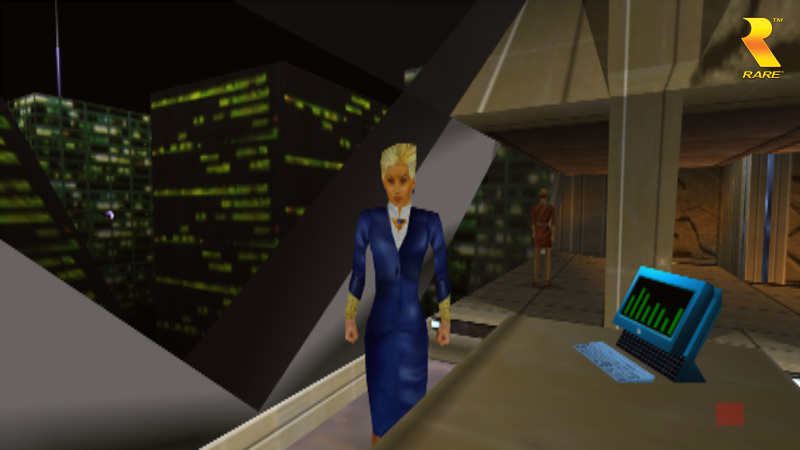 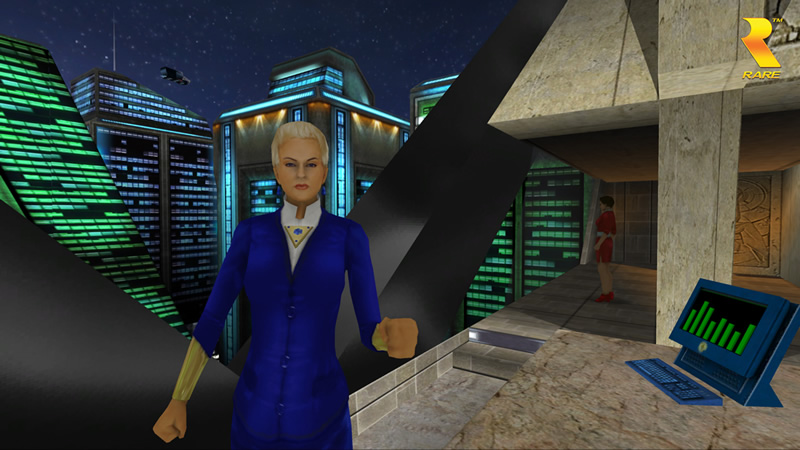 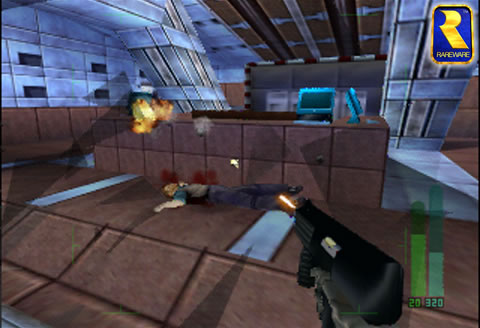 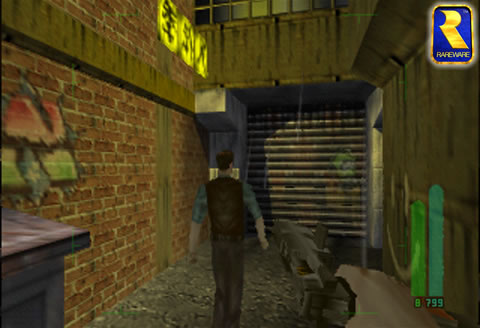 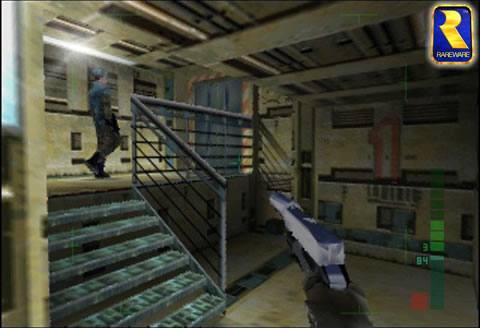 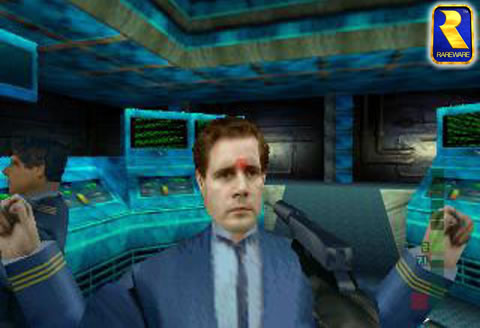 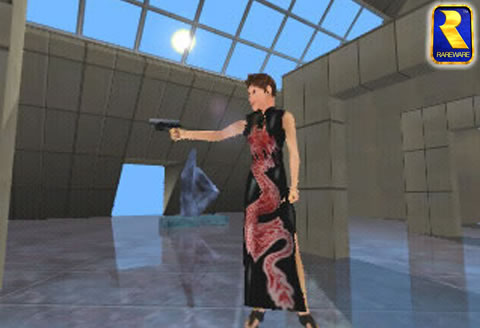