A Mac OS X port of The Free Unix Spectrum Emulator (Fuse) (an emulator of the 1980s home computer and various clones). 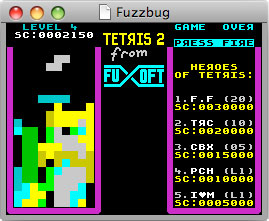 Fuzzbug is an extremely preliminary Spectrum ZX Emulator for Mac OS X. Development of this project began many years ago as test code for my then new emulator shell, and while it was never intended for public release it seemed a shame to sit on it indefinitely. It is not intended to compete with the more elaborate Spectrum emulators, but if you just want to play the occasional game then it may work for you. In short, it's crap, in a funky skillo sort of way.